by Elizabeth DiEmanuele and Phil James American theater has today been marginalized by big-budget Broadway productions, but its storied history reveals that the dramatic arts served more than just entertainment […]

by Elizabeth DiEmanuele and Phil James

American theater has today been marginalized by big-budget Broadway productions, but its storied history reveals that the dramatic arts served more than just entertainment purposes. Not only has the theater been a hub for expressing progressive ideas about race, gender and social mobility, but it has also given a voice to the voiceless. What would the McCarthyist era be without Arthur Miller’s Crucible? Who else could shed light as well as Kushner did when addressing the AIDS crisis during the Reagan era? Theater may not be as resonant in our technology-driven era, but its ability to address important issues without the intrusion of profiteering interests helped the United States forge an identity as one of the most diverse and colorful nations in the world

“…Oh, heavy curse, to have thoughts, reason, taste, judgment, conscience and passions like another man, and not have equal liberty to use them! Why was I born with a wish to be free, and still be a slave? Why should I call another man master?”

William Wells Brown was an African-American abolitionist lecturer and writer during the antebellum era. His play, The Escape, draws on his personal experiences as a slave and offers an appeal against the slave trade. The play examines the deep corruption surrounding race and identity in America at the time. His lines become significant literary tropes of the African slave narrative, later echoed in the 1850s in works such as Frederick Douglass’ “What is the Slave to the Fourth of July” and Harriet Jacobs’ Incidents in the Life of a Slave Girl.

As co-founder of the Provincetown Players–a group consisting of several forward-thinking playwrights including Eugene O’Neill–Glaspell’s reversed the gender roles in this Detective Drama to challenge the heroic stature of men with respect to theater. When two housewives begin figuring out the clues of a murder based on their nuanced perspective of domestic life, they challenge the authoritative place of their detective husbands.

Wilder’s great metatheatrical play can be compared to such small-town forays as Sherwood Anderson’s Winesburg, Ohio and Upton Sinclair’s Main Street, but it is the the work’s stylistic aspects that set it apart from other plays. Set in a small, fictional New Hampshire town, the play follows the lives of residents and in particular George and Emily, a couple trying to negotiate the difficulties of small-town living during an era of skyrocketing urbanism.

Streetcar is just one example from Williams’ varied selection of plays set in America’s Romantic south, but it’s enchanting but haunting portrayal of New Orleans has remained etched into the American literary imagination. About the decline of an attractive but troubled Southern Belle, the play pits her fading ideals against those of the confident but aggressive Stanley Kowalski, who will only lead her further down her road to perdition. 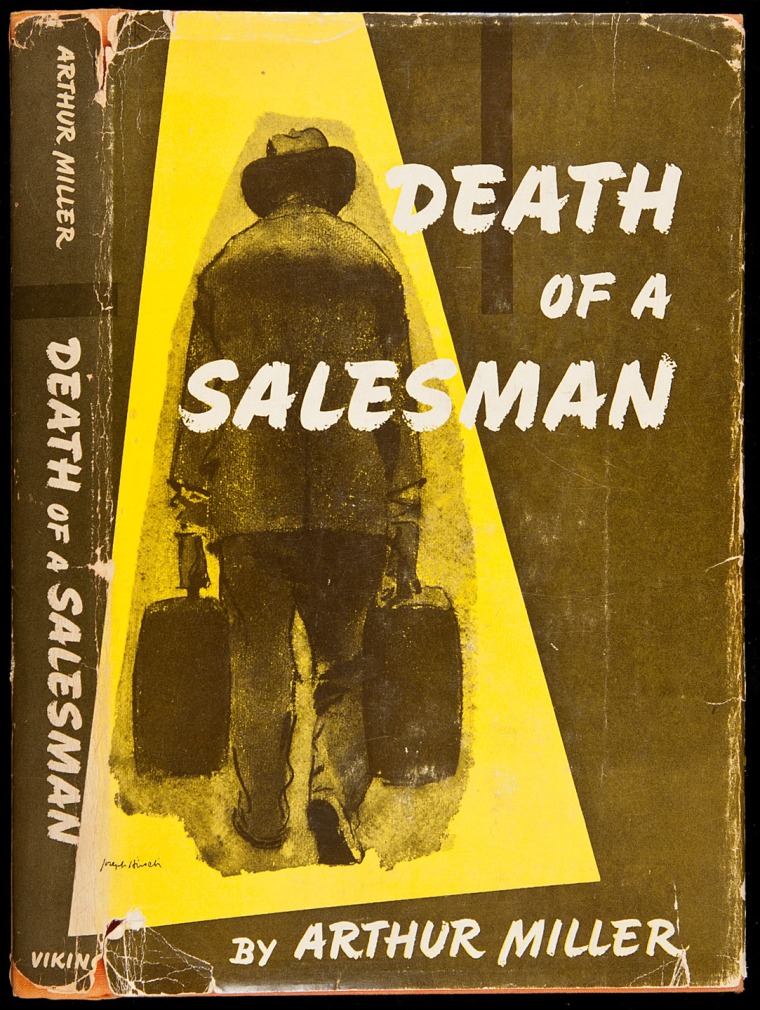 As a young person during the Great Depression, Miller experienced the collective disillusionment of America. Death of a Salesman captures these feelings of emptiness, hopelessness and alienation through Willy’s tragedy. Told through a stream of consciousness narrative, the play remains a provocative text that challenges capitalism and the failed American Dream.

“Because it is my name! Because I cannot have another in my life! Because I lie and sign myself to lies! Because I am not worth the dust on the feet of them that hang! How may I live without my name? I have given you my soul; leave me my name!” (4.X)

The Crucible is an allegory for the irrationality of McCarthyism, where the United States government unjustly accused citizens of being Communist extremists and sympathizers. Through the setting of Salem and the Salem witch trials, Miller’s play emphasizes the deep irrationality surrounding McCarthyism and the brutal investigations of innocent Americans.

Eugene O’Neill’s tragic portrayal of a family broken up by alcoholism and drug addiction is nothing short of masterful. The ironically-titled Long Day’s Journey into Night shows how the Tyrone’s, an ideal American family, lost it all in one generation. O’Neill uses a cyclical pattern to reinforce the crippling effects of abuse on characters incapable of making anything of their lives.

Hansberry’s family drama looks closely at the difficulties African-Americans experienced when trying to move up to the middle class in the impoverished quarters of Chicago.  When a 10,000$ cheque raises the family’s hopes of finally attaining what they believe is the good life, they inevitably become divided over how to move forward.

Albee uses the dialogic techniques of absurdist playwrights Samuel Beckett and Andre Tardieu to capture a professor’s troubled relationship with his wife during a late-night get-together with a young couple. Set during a late night in a small college town, George and Martha host two young upstarts, causing a inevitable clash of generations, as well as the revelation of secrets too painful to hide.

LeRoi Jones wrote this short play as the civil rights movement began picking up steam in America. Dutchman is set on a New York subway and depicts a brief conversation between a blonde seductress and an educated black student, and explores how their conversation inevitably leads to violent dead ends. The play is admittedly polemic, but it would be one of the many that would bring forth an era of activist theater.

Buried Child combines elements of surrealism and expressionism to counter Shepard’s vision of a broken home in the middle of a drought-stricken plain. When a young Vince returns to his family’s rural home, things are not quite as they seem, and as the actions of his family become stranger and stranger, the line between appearance and reality will blur. This is a play about the secrets and vices that connect disparate American generations.

Inspired by Anton Chekhov’s Three Sisters, Henley’s comic-drama portrays the lives of three Mississippi sisters unable to move ahead in lives already tarnished by a series of horrific memories and costly mistakes. Riding on the wave of contemporary Southern Fiction, Henley showed audiences the difficulties and pleasures of living in an insulated part of America.

Set in the tense quarters of an army camp in segregated Louisiana during the Second World War, Fuller’s detective drama recounts the tremorous racial divides that shook the American south at the time. This isn’t just a racial polemic, though. Rather, Fuller provides few easy answers in his portrayal of the intelligent but elitist Sergeant Waters, whose murder reveals even deeper rifts within his own command.

David Mamet dramatized the cutthroat intensity of the business world in his fast-talking, number-crunching play about several real estate salesmen with their jobs on the line. While it pokes fun at the inanity of telemarketing and dead-end jobs, it also reveals that genuine human interaction is virtually unnecessary in the modern workplace, with most characters ultimately turning on themselves in times of trouble.

Growing up black and impoverished in 1950’s America was not exactly the most pleasant of situations, but Wilson’s play is a surprisingly positive take on hard times. About Troy Maxson, a former baseball pro trying to raise a proper family while struggling to make ends meet, the play revolves around his attempt to build a fence with the help of friends and his son. Wilson insisted that African-American Literature needed more powerful and heroic figures, especially at a time when they were still seen as second-class citizens.

Hwang’s portrayal of a French spy fooled into an affair with a male Chinese spy is uproarious, and as one of the first major American works to challenge modern perceptions of the ‘East’, M.Butterfly gave a voice to Asian Americans belittled by stereotyping and misconceptions. Responding to Puccini’s famous Madama Butterfly–an opera featuring a weak-willed female subject–the play was one of many racial commentaries to spring up in the 80’s and 90’s.

By the end of the 1980’s, the AIDS virus had claimed millions of lives, and little had been done by the Reagan Administration to address–let alone admit–that there was a plague occurring on American streets. Kushner’s masterful two-part play provided audiences with a panoramic view of homosexuality during the previous decade, something that divided many but connected everybody. Set in New York and featuring fantastical scenes, dream sequences and dead historical figures, the play is both funny and heartwrenching. Kushner’s optimistic vision of impending social changes, however, provided hope during a difficult time.

Neil Simon is primarily known for his comedic and sentimentalist approach to theater, but his pulitzer-prize winning take on Jewish immigrants trying to make a name for themselves in New York is a more serious look at the strife so many had undergone during the first few waves of massive immigration. The majority of the play is set in a household controlled by a severe and cruel matriarch, and it follows her children as they seek emancipation from their claustrophobic living arrangements.

While it seems a bit forced to have The America Play included on a list of American plays, it is difficult to ignore the poetic beauty of Parks’ playful, experimental take on historical revisionism. The first act of the play focuses on a black sideshow performer acting out the part of Abraham Lincoln, while the second consists of two people trying to turn “The Great Hole of History” into an amusement park. Yes, this seems odd, but at the heart of the play is a defiant call to challenge and toy with the mythologies that define a country, as they threaten to overlook the contributions of minorities and other fringe groups.

The subject matter of Letts’ family drama is not new to the American theater, but the play is nevertheless a triumphant portrayal of the struggles of rural American life. When the alcoholic poet Beverly Weston decides to abandon the household where his sick wife is being taken care of, the family comes together in both good and awful ways. A close observation of the actions that bring some together and set others apart, August sheds new light on a quintessentially American tale told time and again.