The twentieth century changed literature in ways many could never imagine. Everything from literature, to theater and, of course, poetry, shifted from traditional forms to newer, challenging methods of expression. […]

The twentieth century changed literature in ways many could never imagine. Everything from literature, to theater and, of course, poetry, shifted from traditional forms to newer, challenging methods of expression.

The list below looks at some of the most powerful voices to have emerged during the tumultuous century. While it barely scratches the surface of the depth of poetic movements and styles introduced during the century, the list will explore how these poets pioneered a number of different movements, and became voices for the marginalized, the lost and, well, the eccentric.

Let me know in the comments if you believe there are any glaring omissions. The list is, admittedly, centered around mostly English-speaking poets, but it doesn’t mean that their work should be regarded as “better” than others. Poetry is not a competition, and nor is it a hierarchical institution. My only hope is that some of the new discoveries you make while reading this will affect you on a personal level. During a century where much of the world saw huge declines in religion, it is uplifting to know that poetry can still provide us with a spiritual experience.

I want to look at how these poets became voices of modernity, something that defined the highs and lows of the century.

And as the smart ship grew

In stature, grace, and hue,

In shadowy silent distance grew the Iceberg too.

Alien they seemed to be;

No mortal eye could see

The intimate welding of their later history,

– “The Convergence of the Twain”

Perhaps the first major poet of the 20th century, Hardy was born near Dorchester in 1840, and during the 19th century, enjoyed success as one of great novelists of the Victorian Era. At the turn of the century, he shifted from novels to poetry, which some critics regard as the first signs of a shift in English poetry.

Unlike the rural, natural settings of his novels, Hardy’s poetry shifted towards the inexorable forces of modernity emerging in England. Although his form is tightly structured, his descriptions of the sinking of the Titanic (above) and his foreshadowing of the First World War in “Channel Firing” are testaments to a bleak world that Yeats and Eliot will explore in greater detail

Turning and turning in the widening gyre

The falcon cannot hear the falconer;

Mere anarchy is loosed upon the world

Irish modernist poet who wrote on a number of different topics, including Greek and Irish mythology, Irish emancipation, and–as the example above shows us–the dangers of modernity. A mad genius, his work shifted from pastoral sketches to a unique vision of history and the world.

While many of his concepts were quite complex, Yeats insisted on writing with a particular amount of simplicity. He once said that “I tried to make the language of poetry coincide with that of passionate, normal speech.” Many of poems would invoke old myths, but they would be expressed with certain skepticism and ambiguity.

Sure treasure, simple shrine to intelligence,

Under a film of fire such depth of sleep —

Of gold, roof of a myriad golden tiles.

– “The Graveyard by the Sea”

Born on the French Riviera and eventually moving to Montpellier and Paris, Valery wrote much of his work at a very young age, yet revised it almost twenty years later after undergoing a lengthy existential crisis. Known as one of the last great symbolist poets, he was heavily influenced by fellow Frenchmen André Gide and Stéphane Mallarmé.

While one of the key characteristics of symbolist poetry was the intensity of inspiration behind the work, Valery moved away from this pseudo-mysticism and chose rather to create tightly-wound works separated from his own creative process. He brought a level of formal sophistication to symbolist verse. 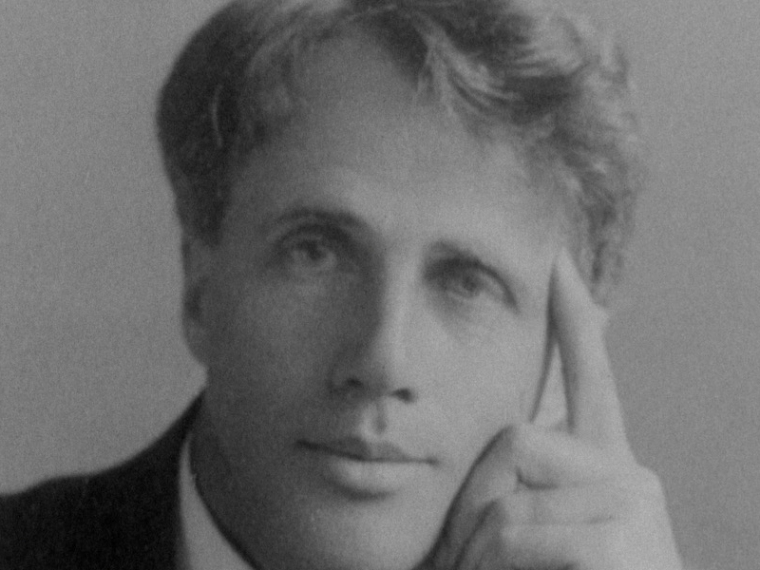 What brought the kindred spider to that height,

Then steered the white moth thither in the night?

What but design of darkness to appall?–

If design govern in a thing so small.

Born in San Francisco, Frost moved to Massachussetts after his father died. After studying at Harvard for two years, Frost briefly attempted farming in New England, but instead chose to move to England to mingle within literary circles. He eventually settled at Amherst College, where he was the poet-in-residence.

Frost’s poetry is often misinterpreted as overly simplistic or indulgently scenic, but both of these assumptions only scratch its surface. Rather, Frost wants to use daily life as the starting point for deeper discovery. Unlike some of the modernist poets emerging during his career, Frost maintained relatively traditionalist forms in his verse. Frost once said that a poem “begins in delight and ends in wisdom”–perhaps the reason that he is still so popular amongst schoolteachers and their pupils.

I placed a jar in Tennessee

And round it was, upon a hill.

It made the slovenly wilderness

The wilderness rose upon it,

And sprawled around, no longer wild.

Born in Pennsylvania, Stevens did not actually pursue a literary career at all. In fact, after graduating from law school in New York, he worked his way up the Hartford Accident and Indemnity company to become their Vice-President in 1934. During this time, he wrote several poetry books, essays and plays.

Stevens’ poetry is at its core epistemological. Concerned more with retrieving a deeper understanding of the world around him, his work is complex but doubly rewarding. The subject of his poetry is not really what is important; rather, it is the way certain objects can elicit higher forms of understanding in unexpected ways. Stevens teaches us how to use our imagination.

Born in New Jersey, Williams descended from Peurto Rican, French and Basque ancestry. Unlike many of the poets on the list, Williams pursued an education in pediatrics, eventually becoming one of the most distinguished medical professionals in New Jersey. Nevertheless, he wrote poetry for virtually his whole career.

Although he is today remembered more for his earlier imagist poetry (see: above), Williams would later move away from his bare-boned, economical poetry and explore more postmodern themes in epic poems like Paterson, a testament to his native New Jersey and a masterpiece in poetic measure.

The apparition of these faces in the crowd;

petals on a wet, black bough.

Pound was born in Idaho but soon sought fame across the ocean. Living in London (where he significantly edited T.S. Eliot’s “Waste Land”), Paris and Rome, he became a regular fixture among the modernists and the so-called “Lost Generation”. During the Second World War, he was arrested in Italy by American troops for treason, and was not released until 1958.

As one of the first writers to write imagist poetry, Pound built much of his earlier reputation upon the objective presentation of images to create an emotional reaction. Eventually, though, his poetry became more erudite, and the Cantos, his lengthy Epic, included references to hundreds of people and texts, some of which still elude scholars today.

It knows the wind and the sun

And it walks hand in hand with the Seasons,

Born in Portugal and growing up in South Africa, Pessoa is perhaps one of the most eccentric figures on this list. A lifelong learner of everything from classical literature to mysticism and astrology, Pessoa wrote using dozens of different heteronyms–81 to be exact (heteronyms are fictional aliases).

Influenced by T.S. Eliot, Ezra Pound and Andre Breton, Pessoa adopted many of the emerging modernist techniques of his day while also including the intricate aesthetics of Baudelaire’s symbolist verse. Pessoa was also a proponent of “automatic writing”, an exercise that he believed could make him tap into his unconscious and achieve spiritual transcendence.

There is shadow under this red rock,

(Come in under the shadow of this red rock),

And I will show you something different from either

Your shadow at morning striding behind you

Or your shadow at evening rising to meet you;

I will show you fear in a handful of dust.

Born in St.Louis but eventually moving to England to work as a banker and a teacher, Eliot won the Nobel Prize in 1948 after a long career that included several poetry collections and a play, Murder in the Cathedral. Although The Waste Land and The Hollow Men describe landscapes virtually devoid of the spiritual, he shocked the literary world by converting to Anglicanism in 1927.

Eliot is perhaps the best-known modernist poet of the day. But what exactly is modernism? while it is difficult to rigidly define the artistic movement, modernism was a series of literary experimentation that attempted to describe the changing world through the modification of basic literary guidelines, such as chronology or form. Poems like “The Waste Land”, for example, splice together various voices and texts to reflect the spiritual desolation of Europe after the First World War.